How to Win the Palm Beach race 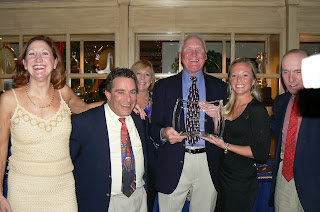 Hutch: No, we used the new #1, pretty light NW at the start, built during the day shifting N, then back to the WNW near the end.

Did you reef ever?

Hutch: None. Could have, but we had control without a reef. We only wet the rail meat a little bit, unlike other years when we were inundated!

I heard the seas offshore were giant. How did they treat you?

Hutch: We went out about 6-7 mi. just to edge of stream. A few biggies but generally 5-7'. Sempre Amantes and others went way out in heavier seas and the results show what happened.

Did you steer the entire time?

Hutch: Actually I ran the main & traveler which was very important with the shifts and gusts. I put Dave Connolly from Outer Limits on the wheel and we were going to trade off, but we both were doing so well where we were and coordinated, we just stayed with our positions.

Who did your crew consist of?

Hutch: Only 7 that I could pull together. Super Dave, Eddie, Holly, Graham, Ferol (woman club member), Dave. C., and myself. Both Eddie and I had screwed up knees before we started!!!! He fell on a pile of cinder blocks the night before...pre-celebrating! Ha!

What was the key to winning, as you saw it?

Hutch: "Right on" tactically...we discussed strategy as a group (as we usually do), then executed the best plan. It was a great and fun race. Thanks for asking! Attached is a pic of those who stayed for the awards and dinner (plus my girlfriend Vicki at dinner).

We like that they made a plan, stuck with it, and took it to the win. We like that the new #1 played a role, too! Congratulations guys!
Posted by Bob at 12:35 PM No comments: