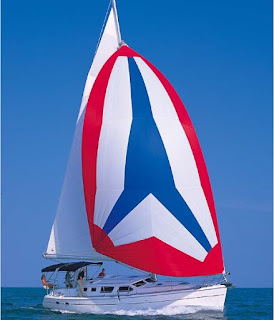 The Boy Scouts say ‘be prepared’. This motto constantly applies to sailboat ownership, and whether you own a cruising catamaran or a monohull, having access to the right sails at the right time can save you time and effort, and often peace of mind.  Basic sail inventories include a mainsail and a headsail and this ultra-simple configuration can take you anywhere, though sometimes slowly and inefficiently.  At some point, usually when sailing downwind, you need to increase your boat's performance to get to your destination more quickly or enjoy the trip more.  You can achieve these goals with an appropriate offwind sail.

Selecting an offwind sail can be daunting as dozens of variables can dictate what type of sail you need for your particular application and in what conditions you use this sail when sailing at a certain angle.  Boiled down, there are two types of offwind sails: reachers and spinnakers.  These two categories are broken down into two other subcategories: screechers and Code Zeros for reaching, and asymmetrical and symmetrical spinnakers for sailing more downwind. With these in your inventory, the void between 90 and 270 degrees of apparent wind is covered and you rest easier knowing that you are prepared for sailing at all angles of the compass.

Spinnakers
Spinnakers take full advantage of the forces generated by the wind, enabling boats to move down range at greater speeds than boats powered by a simple mainsail/headsail configuration.  Generally constructed using lightweight nylon, they are designed to operate across a broad spectrum of different wind conditions and are exceptional in light wind conditions.  They are flown on a non-permanent basis, meaning that they are flown out of sailbags, doused, and stowed when not in use so as to reduce the amount of time they are exposed to harmful UV rays.  Today, spinnakers can even be set with a furler so that they can be furled, detached, and stowed as an independent system once the sail is no longer in use.  Although they require a little more attention, and perhaps a helping hand, spinnakers fulfill the role of efficient downwind sailing.

In order to determine the type of spinnaker for your boat, it is important to look at what your boat is set up to accept.  Monohulls are generally limited to the use of asymmetrical kites, unless they are rigged to accept a symmetrical spinnaker with a pole and the lines required to control the kite.  Catamarans can accomodate either asymmetrical or symmetrical sails, depending on the intended use. 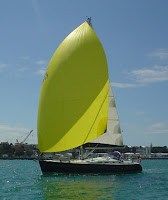 Asymmetrical spinnakers are large, round sails with a luff that is longer than its leech.  Attached to the bow, or the to the weather hull on a catamaran, the sail is projected far in front of the wind shadow created by the mainsail, and with a very large surface area.  These sails can generate a large amount of power while retaining their structural integrity while beam or broad reaching.  They are easy to stow, lightweight, and compressible so that they take up less room for their flying size.

Monohulls with spinnaker poles traditionally utilize symmetrical spinnakers for running dead downwind.  This is achieved with a sail that is square to the pole, with large shoulders near the head of the sail, and the ability swing the pole from side to side in order to adjust to the wind shifts coming from behind.  It is possible for catamarans to accept symmetrical spinnakers as well – the kites are flown off gear affixed to the bows – allowing for faster downwind speeds and greater range of mobility.

Screechers are flown like an asymmetrical kite, generally off of a bowsprit or the tack attachment point on the bow.  These particular sails are generally made from lower stretch fabrics, and are shaped with tight luff lines and with a body that is rounder than a genoa or jib, and but not nearly as round as a spinnaker.  The sail is flown when sailing between a close reach and a broad reach.  The result is a sail that helps stabilize the boat as it powers through waves when there is a need to sail just off the wind, but with the versatility of sailing with greater power downwind than with a genoa.

Code sails are generally used on a beam to broad reach in light to moderate winds.  Sailors often refer to these as their “secret weapons”, as they fill the role of a specific niche.  Code Zeros are generally made from laminate or Nylon materials, hoisted out of sailbags or on nonpermanent roller furlers, built with a larger roach area, and have a deeper profile.  From a glance, the sail is shaped like a very fat genoa but acts much like a spinnaker, providing a large amount of surface area.  In this sense, it cannot be flown close to the breeze like a screecher, nor will it go dead downwind, but it will bomb across a broad reach with ease.


The addition of an offwind sail will make a remarkable difference in how you enjoy your boat.  Beyond obtaining higher speeds, better performance, and greater range, there is peace of mind knowing that you are prepared to take on the seas, no matter the conditions.

Written by Owen Kaufman, Super Sailmakers
Posted by Unknown at 11:22 AM No comments: 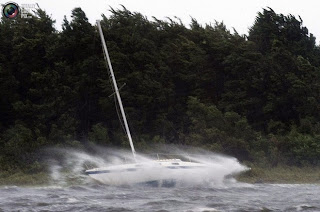